I have not used this site for a very long time, as one may be able to tell by all of the expired links, etc. I think that it may be time to start using it again. Here’s a song for a buddy:

‘Tis the voice of the Lobster: I heard him declare
“You have baked me too brown, I must sugar my hair.”
As a duck with its eyelids, so he with his nose
Trims his belt and his buttons, and turns out his toes.
When the sands are all dry, he is gay as a lark,
And will talk in contemptuous tones of the Shark;
But, when the tide rises and sharks are around,
His voice has a timid and tremulous sound. 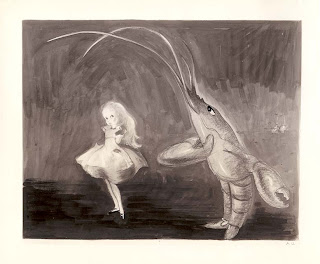 I passed by his garden, and marked, with one eye,
How the Owl and the Panther were sharing a pie:
The Panther took pie-crust, and gravy, and meat,
While the Owl had the dish as its share of the treat.
When the pie was all finished, the Owl, as a boon,
Was kindly permitted to pocket the spoon;
While the Panther received knife and fork with a growl,
And concluded the banquet by — *